Remember how I told you I was afraid of a lot of things?

Well, there is an upshot to every downside, I always say, and the upshot here is that I research things I’m afraid of extensively, which means I’m very knowledgable in obscure areas.

Ever wondered about the intricacies of plane crashes? Come to me. Need some information about the behaviour of spiders? Be my guest.

While planes and spiders are silly things to be afraid of, lions and hippos are very rational things to fear, if you’re sharing land with them.

People do actually get munched on safari. There is a real likelihood that on any given day, on the five-minute walk from your room to the main area, that you will encounter an animal that might munch you if you don’t do the right thing.

So assuming anyone is actually reading this blog, and assuming that someone might soon share land with wild animals in Africa, here is a definitive guide to the art of not getting munched.

I have gathered this information by asking every single guide I’ve come across here in Africa: a) the closest call they’ve ever had with a wild beast, and b) how they emerged alive.

*All photos taken by yours truly* 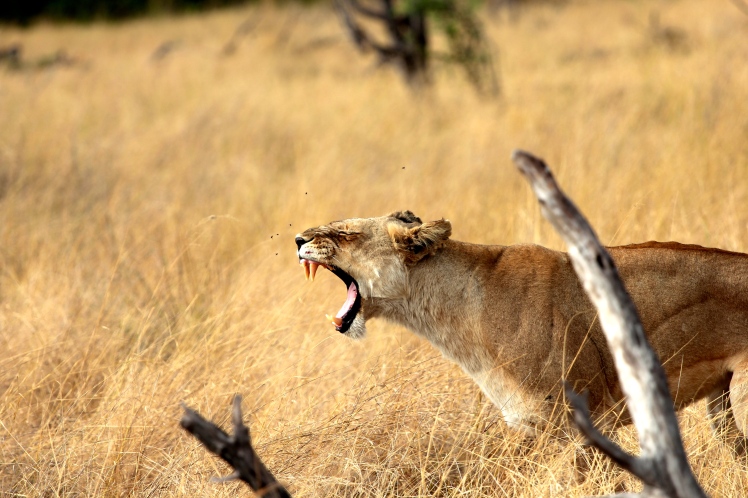 The skinny: Very top of the food chain, hang around in groups, pretty lazy during the day, ferocious at night

What to do if you bump into one: Make direct eye contact, and don’t break it. Back very slowly away. Never turn your back, never run. Lions will do one or two mock charges before a full-on attack (where they run at you but stop suddenly a few paces away). If it mock charges you, throw your arms out to make yourself look bigger and make as much noise as possible. Most often, this will make them reconsider and run off.

How unpleasant your death will be: Grim. A lion will get their jaws around your windpipe and suffocate you to death. They do this for a silent death, because if hyenas hear a kill, they will trot on over and steal the prey off them. Think that sounds bad? Wait til you get to the hippo section. 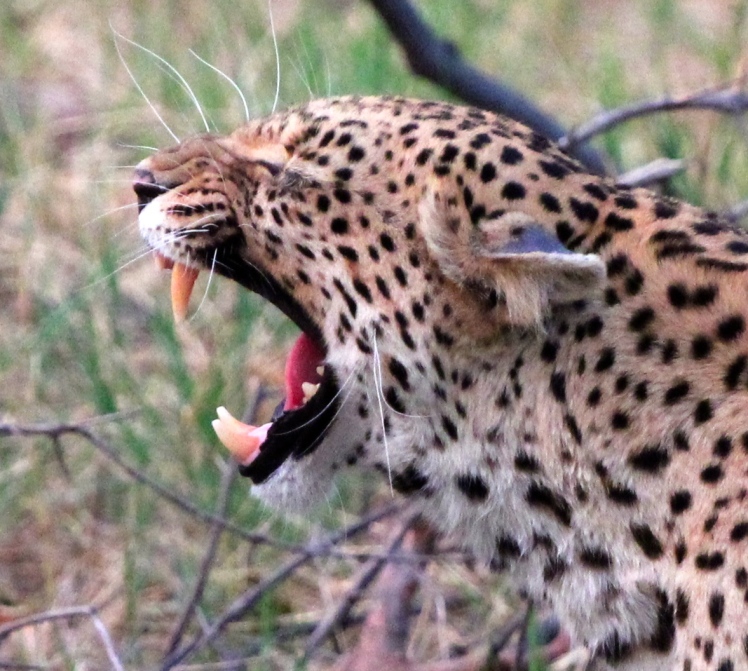 The skinny: Both very solitary big cats who hunt alone. Less powerful than lions, and thus also less lazy. In the same way as if you’re stupid, you have to work harder at school.

What to do if you bump into one: Opposite of lions, never make direct eye contact. They will view this as a challenge. Stand very still. These guys don’t always mock charge. If they come for you, as with a lion, make yourself look big and brave and make lots of noise.

How unpleasant your death will be: Suffocation, same as lions.

The skinny: They look slow and calm and friendly. They aren’t. Catch a herd on a bad day and they will make you sorry you ever did.

What to do if you bump into one: Stand your ground and pretend to be brave. The elephant will flap its ears aggressively and toot. Don’t move. It will do one or two mock charges. For fuck’s sake don’t run. Make yourself big and loud. Pray that works.

How unpleasant your death will be: Awful. It will gore you with its tusks and trample you into an early grave.

The skinny: Found in herds of up to several thousand. Very tough. They don’t flee from a threat like most prey animals, they turn and fight. And that threat includes you.

What to do if you bump into one: Run. Buffalo don’t mock charge. They give no warning at all. They just suddenly decide that you’re toast. In this case, you’re a bit fucked really, but running is better than taking your death standing still. If at all possible, I’m told, climb a tree.

How unpleasant your death will be: Bad. As with an elephant, it will gore you with its horns and trample you.

The skinny: Very grumpy animals, responsible for more deaths in Africa than any other wild animal by far. What you really don’t want to do is to get between a hippo and its body of water.

What to do if you bump into one: You idiot! You’re screwed! How did you manage to position yourself between a hippo and its body of water? Run like the wind, and accept that you’ll probably die.

How unpleasant your death will be: Really, really bad. It’s jaws and teeth somewhat resemble a giant hole punch. A hippo won’t do the decent thing and bite off your head, it will go for your mid-section and bite you clean in half, then run off.

The skinny: These beauties hunt in large packs, and they are vicious and formidable. Once they’ve singled out a victim, their success rate is around 80%. A lion’s success rate is only 30%.

What to do if you bump into one: Too late sucker. You’re dead. See above. You can’t outrun them, intimidate them or fight back.

How unpleasant your death will be: Savage, but relatively fast. Wild Dogs are unusual in that they won’t kill you first, they will eat you alive, disembowelling you first. Literally, they just start tearing chunks off. But there are loads of them, and you’re in shock, and you’re usually dead within 1-2 minutes.

The skinny: Obviously there are lots of different species of sharks. Bull sharks are the ones most likely to kill you. Great Whites are pretty lethal too.

What to do if you bump into one: Sharks will generally only approach a human out of curiosity, or if it mistakes it for a seal in distress. Therefore, don’t thrash about. But it’s probably too late for that. If at all possible, punch it in the nose with all your might. It’s the most sensitive part of its body and it will swim away defeated.

How unpleasant your death will be: Catastrophic. They probably won’t bother killing you because once they take a bite, they spit it out (humans taste gross) and swim off. Most commonly they will take a chunk out of your thigh or arse, and if that severs an artery (often does) you’ll bleed out.

One thought on “How not to get eaten by a wild animal in Africa, a gruesome pocket guide”