What does God – (or Allah, titles interchangeable) – have in common with Santa Claus?

None of them exist.

‘How arrogant!’ You might retort, in response only to the God reference – (‘obviously Santa Claus doesn’t exist.’)

I’ll say it again. God does not exist.

Of course, there are all sorts of definitions people attach to the word God. For some, it’s a ‘mysterious creator’, or ‘a feeling inside,’ or ‘something bigger than us.’

For the purposes of the above statement though, I mean to say that I, Annabel, am 100% convinced, would bet my mother’s life on it, that the Christian God does not exist. Neither does Allah. Neither does Santa Claus.

It was Richard Dawkins who most notably drew the comparison between God and Santa Claus in his book, The God Delusion, and I’ve always loved it. It’s so brilliantly simple.

Both God and Santa Claus are imaginative fictional characters crafted by humans in order to a) cheer themselves up and b) keep others obedient.

And it definitely works.

I was absolutely enamoured with Santa Claus as a child. I worshipped him.

The notion of his big red suit and his long white beard comforted me. I pleaded with him for the things I wanted and was delighted when they turned up on Christmas Day. I sang songs about him. I probably really believed that if I was well-behaved, he would reward me, and if I was bad, not so much.

Broadly speaking therefore, Santa Claus is a lovely thing for children to believe in, and really very harmless. I was very sad when the news was broken to me that he wasn’t real.

For the vast majority of the world’s adult population, however, Santa Claus is alive and well in the form of God. Or Allah. Or whichever other deity gets his own storybook.

Only around 2-3% of humans around the world describe themselves as atheists.

I can see how, if there happened to be a God as lovely as Santa Claus, you’d want to believe it. Whenever I’m derogatory about religion, people say, “but for most people, religion is about love and morality and charity!”

Fair enough, I say. For a lot of people it is.

Except that if you really, really, really believe in God or Allah, you believe in a Guy in the Sky who – according to his very own autobiography – is violent, oppressive and genocidal. Not to mention sexist, jealous, vindictive, and pro-slavery. 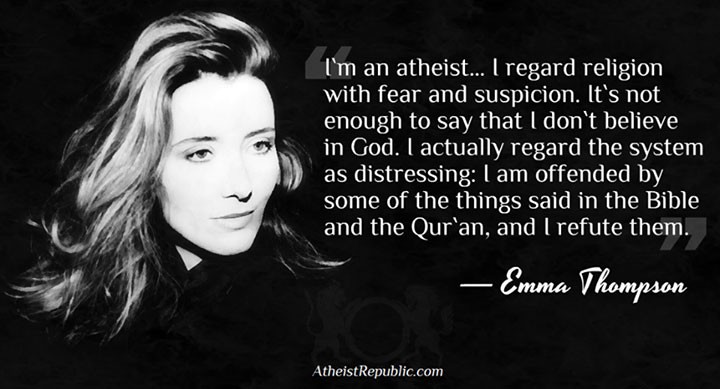 People say that the actions of ISIS – a terror group which draws on certain parts of the Quran to justify its abhorrent war-waging – do not represent true Muslims.

Except for that, technically, they do.

The Quran- believed to have been written by Allah himself through the prophet Mohammed – actually SAYS, (Verse 8:12) “I will cast terror into the hearts of those who disbelieve. Therefore strike off their heads and strike off every fingertip of them.”

And I’m not saying that the Quran’s calls to violence make all Muslims dangerous. Of course they don’t.

Or Christians. If you think the Quran is bad, try flicking thorough the Bible’s Old Testament.

A snippet: (Hosea 13:16) “The people of Samaria must bear their guilt, because they have rebelled against their God. They will fall by the sword; their little ones will be dashed to the ground, their pregnant women ripped open.’

Equally, this does not mean my Irish Catholic grandmother, who attends church every Sunday, would so much as hurt a fly. She sweeps all those nasty words and sentiments under the carpet.

What I’m asking people who believe in God or Allah is simple.

If you are someone who chooses not to stand by all the murderous rhetoric from your Guy in the Sky’s storybook, why worship any of it?

What on earth is the point? Because some of what he says is nice? Because someone once promised you he existed?

Why not just pray to Santa Claus? I’m serious!

He’s much more pleasant. Sure, a bit controlling and domineering with the whole ‘who’s been naughty and who’s been nice’ thing, and OK, a bit materialistic.

But none of his storybooks preach violence, enthic-cleansing or genocide.

If I had to pray once a day to anything, it would not be a character with any of these blots on his record. I simply wouldn’t stand for it. I wouldn’t associate myself with it.

Now obviously all this is rudimentary because most of the time, you can’t persuade people to switch which storybook they believe in.

Largely, people believe in the storybook they happened to be taught as a child. It helps if they live somewhere where everyone else around them brings it into adulthood.

If you’re a die-hard Christian, for example, you probably think the likelihood of Allah existing is about the same as, well… Santa Claus.

Usually, this sort of a rant should end with some form of suggestion. A proposed solution. So what do I reckon we do about all this?

Well nothing, sadly. Other than flog a dead horse.

People are always going to have their storybooks. People will always fight over them. And the world’s atheists, all 2% of them, will always ring their hands, pour themselves a brandy, and go take a nap.

But if I could do something? If was omnipotent? If I were the ruler of the universe?

I’d say: “Folks, don’t worship me. I’m awful. I drink too much brandy, prefer dogs to humans, and once smacked my little brother in the face because he wouldn’t let me use his Playstation.

…But please, do let me introduce you to my good friend Santa Claus.”

Author’s note: In England, we call Santa Claus ‘Father Christmas’, which I think has a much better ring to it. But reluctantly, for the benefit of all my non-English readers, I had to blaspheme on this occasion.

4 thoughts on “What does Allah have in common with Santa Claus? A rant against all religion”