What have I been doing?

Other than being routinely ignored by my cat, I left the Mail and joined The Telegraph. Everything about it is brilliant, except that I can’t walk to work anymore and now have to take the Tube twice daily – which I have ranted about here. Not the Tube so much, but the people on it. People generally, I suppose.

Where have I been?

Cape Town, South Africa, which I wrote a guide to here, with Steven-from-Antarctica. The best thing about this place is that you can swim with wild seals in a cove which the great white sharks can’t get into. All things considered, I would say Cape Town is my favourite city on Earth.

Pula, in Croatia. I didn’t write about this at all because it was more a proper holiday (lots of lying down) and not so much an exploration (wandering and peering). I do mention it in this story I wrote for the Telegraph, which is about how we’re all faking awe when we go to see touristy things.

Austin, Texas. With my friend Lou, on one of her business trips. It was a very short one, mainly comprising of us bobbing around in the pool gossiping, which is of no interest to you. I couldn’t tell you where to go or what to do in Austin, because I didn’t do much wandering. But I can tell you that Austin seems like a good place to go. The weather is great, they have hilarious accents and it’s just a very cool spot to be at the moment. You can feel it in the parched air.

The Maldives. To a frankly ridiculous resort called Coco Bodu Hithi where you can plop into the bath-warm turquoise sea right from the steps of your villa-on-stilts. I hate it when people say ‘turquoise sea’. It’s so lazy-sounding and over-used. But I’ve looked at the thesaurus and there is only really one word you can use to describe amazingly-blue water like this, and the colour of the ocean in the Maldives is turquoise. It just is. So that’s why everyone uses it. I also stayed on its sister island Coco Prive, which I still haven’t finished writing about but I will.

New York. On a bonkers 24-round trip. It’s a new route from Norwegian Air which involves leaving London at dawn, flying all the way to New York, and getting back again by midnight. It means spending 11 hours in the sky, but with the time difference taken into account gives you a full day there. A full rundown on this will be published in the Telegraph, soon (not in seven months, much sooner than that). But in summary – is it worth it? Yes, if you’re a bit insane and you don’t have to go to work the next day.

Finland, to review a new Arctic resort in Lapland called Apukka. You can read my Telegraph review here. It was my second trip to Lapland (the first being to the Swedish portion) and this time I got a full-on Northern Lights display which was entirely unexpected, un-forecasted and so astonishing it made me cry. 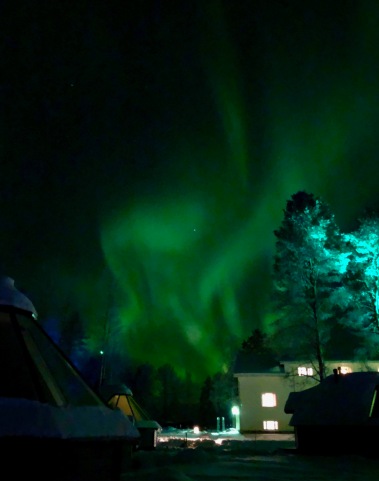 Australia, a few times, to sit on a hill in the middle of nowhere with my father, who lives there. These weeks spent together always involve us drinking too much wine and whiskey, watching kangaroos boing boing boing around the land, crashing in and out of the pool, and generally pretending that no world and no rules exist outside the perimeter until he has to drive me back to the airport again. The last time I was in Australia (January) was a bit different, in that I was ill with a horrid, sudden bout of depression. I’ve touched on it here, but I have also now written a quite in-depth feature on it which will be published for the Telegraph soon (not in seven months).

Where am I going next?

The countryside. I’m taking Pringle, my grumpy, ageing, sarcastic-looking dog, to Cliveden House just outside London, which is the UK’s most pet-friendly hotel, apparently. For £500 a night, I should effing hope so.

Iceland, to write about Icelandair’s new Boeing 737 MAX8 (since joining the Telegraph, I’ve had to get nerdy about plane models). Also to wander around Iceland and peer at things for a few days.

Budapest, Hungary. To wander around and peer at things. I will also be writing about this.

Nashville, Tennessee, because I’ve always wanted to go, and also to cover CrimeCon – which is a convention for people like me who are (for whatever reason) obsessed with True Crime. Mainly, I’m going because I want to try and find this reason. I don’t like violence. I hate gang movies. But I do like finding out about serial killers, and murder mysteries and confounding missing person cases. WHY. Apparently the true crime audience is primarily women. WHY. I’ll let you know what I dig up.

While there, I’ll be interviewing my two favourite true crime podcasters, which will be Weird with a capital W. I have been listening to this collective group of American voices every week for more than a year. In Australia, I listened to the back catalogues for hours and hours when I was ill, walking miles a day in giant dusty circles under the blazing sun, because I couldn’t do much else. I feel like they’re my mates. Must not greet them in manner of old friend.

For anyone else who is interested in true crime (WHY), I would highly recommend the following aforementioned podcasts. They’re both well put together, more informative than the news, and more entertaining than most other podcasts.

Two guys – Aaron and Justin, whose voices I can’t tell the difference between, one of them giggles more – research, discuss and debate interesting, intricate true crime cases. Fairly self-explanatory. They always bring new insights to these often-old cases, have a great conversational dynamic, and deftly manage to walk you through each story in a way that is rational and level-headed, but never boring. I’ve only disagreed with their conclusions once, and that was with the Madeleine Mccann case.

Same sort of formula. Two guys – Nic and ‘the Captain’, whose voices I very much can tell the difference between – pick one case per episode and dissect it together. Nic is the sensible one who leads the narrative, does all the background research (I think), and does so very well. The Captain has a very deep, growlish voice, swears highly creatively, and sprinkles his rhetoric with borderline-inappropriate* jokes. He’s in charge of the sound production and music. Together, on air, they are comic gold.

*only inappropriate if you’re a really tedious, easy-to-offend humanoid